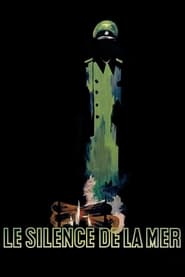 Trailer
You are watching now the Le Silence de la Mer movie has Drama Romance War Genres and produced in France with 87 min runtime. Brought to you by Watch4HD.com and directed by Jean-Pierre Melville,

1941 in a small town in Nazi occupied France. Against the will of its elderly male and his adult niece residents, the Nazis commandeer a house for one of their officers, Lt. Werner von Ebrennac, to live in for as long as he is in the area on Nazi business. As a figurative and literal silent protest against the Nazis and the officer, the uncle and niece do whatever is required of them while the officer is in their house, however they do not acknowledge his presence, living largely in silence whenever he is around. The officer treats the housing situation with care, like he is a guest. Although not a nightly occurrence, the officer begins an evening routine with his reluctant hosts: in his civilian clothes, he knocks on the door of the room in which they have convened for the evening, walking in shortly thereafter knowing that no acknowledgment will be made for him to enter, he visits with them for no more than five minutes before he bids them a good evening as he exits. During these visits, he speaks reverently about, among other things, culture – music and literature in particular as he is a composer and musician – his national pride, his love of France, and what he hopes will emerge from the war, namely a strong and free France, stronger than it was before the war, and the marriage between the French and German cultures which will enrich the lives of all Europeans. All the while, he makes no expectations from them, either to listen, or to answer if they are indeed listening. At the end of what ends up being his six month stay at the house, he does end up having a profound effect on the uncle and niece, despite that effect being largely unacknowledged, as his stay in France has a profound effect on him, opening up his eyes to the reality of the war based largely on his first ever visit into Paris.

Don wants to reconnect with his estranged family. His partner, Lisa wants to live a life free of his violent rages. Their neighbour, Ritchie wants to get away from his…

Kung Fu idol Bruce Li plays Lee Ting Yi, A Hong Kong taxi driver whose striking resemblance to Bruce Lee catches the eye of one of his passengers who happens…

On Friday, a single e-mail blips through the Internet. The word spreads quickly through the city: the party is on. Saturday evening, two hundred people secretly converge at an abandoned…

Marquise is a drama about the rise and fall of a beauteous actress. As cheerfully portrayed by Sophie Marceau, the eponymous heroine is an engagingly ribald, but perhaps rather too…

Andrew Norris is a new teacher in an inner city high school that is like nothing he has ever seen before. This school is so dangerous that the students have…

In this revisionist drama, the film delves into the family lineage of Wyatt Williams, the character made famous by Peter Fonda in the original Easy Rider Movie. Centering around the…

A young man, born deaf, invents a computer so he can hear and speak with others.

When Mickey’s crazy step-son Leon is killed in a construction ‘accident’, nobody in the working class neighborhood of God’s Pocket is sorry he’s gone. Mickey tries to bury the bad…

Lamb, based on the novel by Bonnie Nadzam, traces the self-discovery of David Lamb in the weeks following the disintegration of his marriage and the death of his father. Hoping…

Sam is a killer by trade, one of a group of merciless men known as the Shadow Syndicate whose business is delivering fate for a price. But when Sam is…

In June 1953, two years after he was re-elected as Prime Minister Winston Churchill collapses following a dinner party at Downing Street. Diagnosed by his doctor Lord Moran as having…

Deep in Russia, there is an invisible city that houses thousands of men, women and children who live and work behind double barbed-wire fences monitored by armed guards. They are…