Trailer
You are watching now the Chariots of Fire movie has Biography Drama Sport Genres and produced in UK with 125 min runtime. Brought to you by Watch4HD.com and directed by Hugh Hudson,

It’s the post-WWI era. Britons Harold Abrahams and Eric Liddell are both naturally gifted fast sprinters, but approach running and how it fits into their respective lives differently. The son of a Lithuanian-Jew, Harold, who lives a somewhat privileged life as a student at Cambridge, uses being the fastest to overcome what he sees as the obstacles he faces in life as a Jew despite that privilege. In his words to paraphrase an old adage, he is often invited to the trough, but isn’t allowed to drink. His running prowess does earn him the respect of his classmates, especially his running teammates, and to some extent the school administration, if only he maintains what they consider proper gentlemanly decorum, which isn’t always the case in their minds. Born in China the son of Christian missionaries, Eric, a Scot, is a devout member of the Church of Scotland who eventually wants to return to that missionary work. He sees running as a win-win in that the notoriety of being fast gives him an added outlet to spread the word of God, while he sees his speed as being a gift from God, and he wants to run to honor God and that gift. This view does not sit well with his sister, Jennie Liddell, who sees his running as only taking away time from his work to God. Harold and Eric’s lives do intersect in national races, but it is the 100 meter track event at the 1924 Paris Olympics which the two men and their supporters most anticipate. Beyond the fact that Americans Charles Paddock and Jackson Scholz are favored in the event, the much anticipated head to head between Harold and Eric may be further shadowed by other issues, especially as it affects Eric’s Christian beliefs.

Murder Made Me Famous

Murder Made Me Famous shares personal accounts from victims’ family members, jurors, members of law enforcement and journalists involved with each case to give viewers an intimate perspective and disclose…

This is the story of a teenager named Gracie Bowen, who lives in South Orange, New Jersey, is crazy about soccer, as are her three brothers and former soccer star…

The story begins as WikiLeaks founder Julian Assange (Benedict Cumberbatch) and his colleague Daniel Domscheit-Berg (Daniel Brühl) team up to become underground watchdogs of the privileged and powerful. On a…

Erin Brockovich-Ellis is an unemployed single mother, desperate to find a job, but is having no luck. This losing streak even extends to a failed lawsuit against a doctor in…

In 2008, J. B. Bernstein is a sports agent who finds his business being seriously outplayed by his deep-pocketed competitors. Inspired by reality shows and Indian cricket games on TV,…

The true and inspiring survival story of a teen horrifically kidnapped, how she manipulates her deranged captor, leaves clues, stays witty in her own mind to control her fear, engineers…

Vernon Johns, a brilliant man coupled with an eloquent speaker, upsets his community through his radical ideas on social change and economic independence of blacks. From his pulpit, he attacks…

Explores Manmohan Singh’s tenure as the Prime Minister of India and the kind of control he had over the cabinet and the country.

In 1964, while on a short trip to Paris, the American writer and art-lover James Lord (Armie Hammer) is asked by his friend, the world-renowned artist Alberto Giacometti (Geoffrey Rush),…

Jesus dreams of a medieval battle in the name of Jesus Christ and of a dying world war soldier who, in desperation, calls out the name: Jesus. Jesus awakes, distraught…. 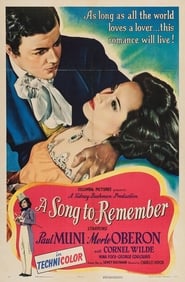 A Song to Remember

Prof. Joseph Elsner guides his protégé Frydryk Chopin through his formative years to early adulthood in Poland. At a recital in a duke’s home Chopin insults the new Russian-installed governor,…